This is a package for GNU Emacs that can be used to tie related commands into a family of short bindings with a common prefix - a Hydra. 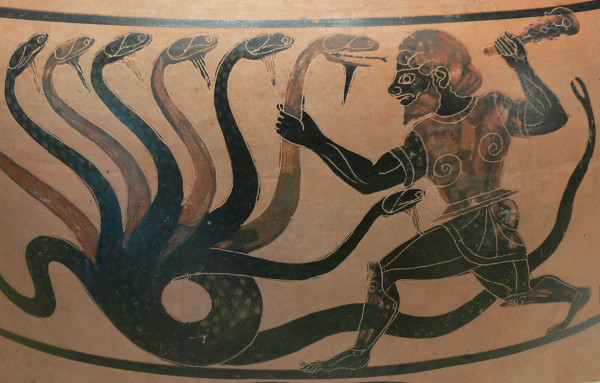 Once you summon the Hydra through the prefixed binding (the body + any one head), all heads can be called in succession with only a short extension.

The Hydra is vanquished once Hercules, any binding that isn't the Hydra's head, arrives. Note that Hercules, besides vanquishing the Hydra, will still serve his original purpose, calling his proper command. This makes the Hydra very seamless, it's like a minor mode that disables itself auto-magically.

If you want to quickly understand the concept, see the video demo.

The one with the least amount of code

With this simple code, you can:

Here's the result of pressing . in the good-old Buffer menu: 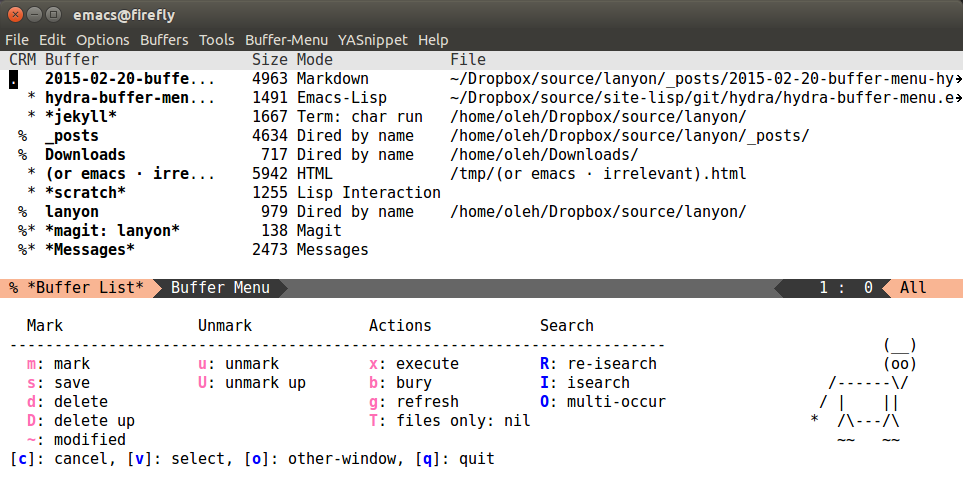 The code is large but very simple:

Looking at the code, you can see hydra-buffer-menu as sort of a namespace construct that wraps each function that it's given in code that shows that hint and makes it easy to call the related functions. One additional function is created and returned as the result of defhydra - hydra-buffer-menu/body. This function does nothing except setting up the hint and the keymap, and is usually the entry point to complex hydras.

To write your own hydras, you can:

You can find some user created hydras and more documentation in the project's community wiki. Feel free to add your own or edit the existing ones.

Each hydra (take awesome as a prefix to make it more specific) looks like this:

Each hydra needs a name, and this one is named hydra-awesome. You can name your hydras as you wish, but I prefer to start each one with hydra-, because it acts as an additional namespace layer, for example: hydra-zoom, hydra-helm, hydra-apropos etc.

This can be any keymap, for instance, global-map or isearch-mode-map.

And here's the relevant generated code:

If you don't want to use a map right now, you can skip it like this:

You can read up on what a plist is in the Elisp manual.

You can use awesome-plist to modify the behavior of each head in some way. Below is a list of each key.

You can specify code that will be called before each head, and after the body. For example:

The :exit key is inherited by every head (they can override it) and influences what will happen after executing head's command:

The :foreign-keys key belongs to the body and decides what to do when a key is pressed that doesn't belong to any head:

The :color key is a shortcut. It aggregates :exit and :foreign-keys key in the following way:

It's also a trick to make you instantly aware of the current hydra keys that you're about to press: the keys will be highlighted with the appropriate color.

The :timeout key starts a timer for the corresponding amount of seconds that disables the hydra. Calling any head will refresh the timer.

The :hint key will be inherited by each head. Each head is allowed to override it, of course. One value that makes sense is :hint nil. See below for an explanation of head hint.

The :bind key provides a lambda to be used to bind each head. This is quite advanced and rarely used, you're not likely to need it. But if you would like to bind your heads with e.g. bind-key instead of define-key you can use this option.

The :bind key can be overridden by each head. This is useful if you want to have a few heads that are not bound outside the hydra.

This can be a simple string used to build the final hydra hint. However, if you start it with a newline, the key-highlighting and Ruby-style string interpolation becomes enabled, as you can see in hydra-buffer-menu above.

To highlight a key, just wrap it in underscores. Note that the key must belong to one of the heads. The key will be highlighted with the color that is appropriate to the behavior of the key, i.e. if the key will make the hydra exit, the color will be blue.

To insert an empty character, use ^. The only use of this is to have your code aligned as nicely as the result.

To insert a dynamic Elisp variable, use %` followed by the variable. Each time the variable changes due to a head, the docstring will be updated. format-style width specifiers can be used.

To insert a dynamic Elisp expression, use e.g. %(length (dired-get-marked-files)). If a head will change the amount of marked files, for example, it will be appropriately updated.

If the result of the Elisp expression is a string and you don't want to quote it, use this form: %s(shell-command-to-string "du -hs").

The head-binding is a string that can be passed to kbd.

Here's an example of the last option:

Here's a list of body keys that can be overridden in each head: